Palazzo Vecchio and the Tower of Arnolfo

Posted on July 14, 2019 By travelingbeyondthepostcard 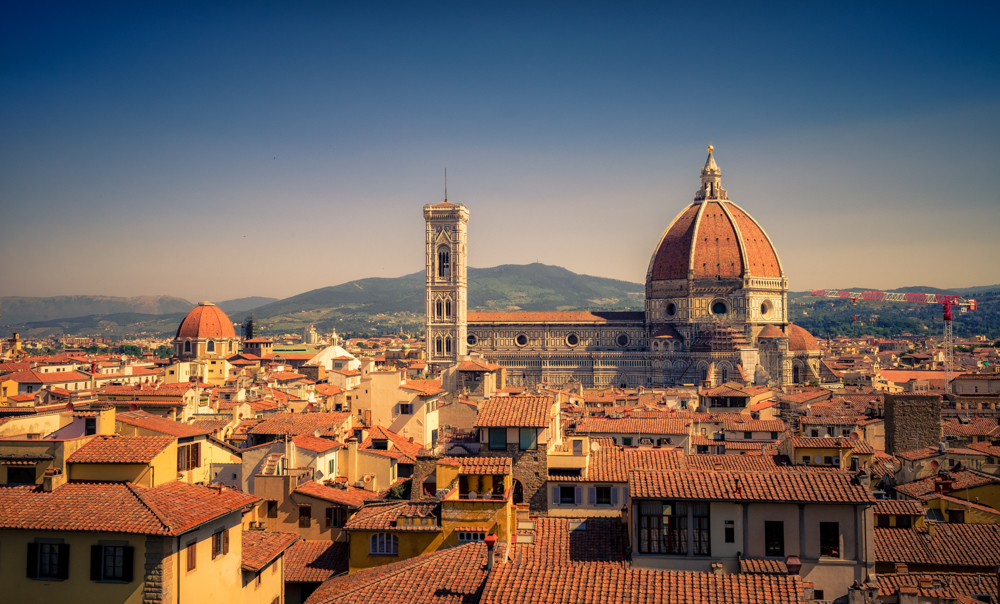 Palazzo Vecchio is the Town Hall of Florence.  It was built between the 13th and 14th centuries.  The oldest part was designed by Arnolfo di Cambio and completed about 1299.  It was built on the ruins of an ancient Roman theater that dates back to the first century AD.  You can visit areas of excavation below the building – it’s quite fascinating!

It is located in the Piazza della Signoria where there are a number of statues, including a remarkably poor copy of Michelangelo’s David.  One statue in the piazza is truly remarkable, and I am honestly puzzled as to why it has not been moved into a museum out of the elements.  That is the bronze Perseus with the head of Medusa by Benvenuto Cellini.  He worked on this statue for nine years starting in 1545.  It was an extremely ambitious undertaking because of its shape and size.  Getting the bronze to flow from top to bottom and side to side was very difficult.  This is a masterpiece!  If you look at the back of the statue Cellini has put a self-portrait into the helmet and hair of Perseus!  (As a side note, Cellini was probably the most arrogant person ever born and a terrible human being.  He was sexually abusive and a murderer who thought himself above the laws of man. We read a portion of his autobiography.  A very interesting person to learn about!)

The courtyard is lovely. The statue Putto with Dolphin (this is a copy of the original) was done by Verrocchio (mentor to Leonardo Da Vinci) and the frescoes are by Vasari.

The Salone dei Cinquecento  (Hall of the Five Hundred) was built in 1494.  It was the seat of the Grand Council which consisted of 500 members.  It is a long beautiful room that has paneled ceilings, wall frescoes and statues. Leonardo Da Vinci and Michelangelo were commissioned to paint the frescoes.  Both of their works were incomplete and have been lost.  Da Vinci, who was always experimenting with new materials, decided to mix wax into his pigments.  When braziers (pan for holding burning coals) were brought in to facilitate drying, the wax melted ruining much of the work.  Later Vasari painted the murals that are seen today.  It is said that Vasari, not wishing to cover Da Vinci’s work, built a false wall over it before painting his fresco. Michelangelo never progressed beyond the preliminary sketches because he was commissioned to paint the ceiling of the Sistine Chapel.

The other room that really impressed me is the Hall of Maps.  It is so lovely and the old maps are so interesting.  It was meant to show the world as it was known in the 16th century.  Vasari was commissioned by Cosimo Medici to design the room.

The walk up the bell tower to get a wonderful view of the city at several different heights is a must do.  There is a walkway about half way up that gives you another opportunity to photograph, albeit through openings in the walls.