Posted on June 25, 2019 By travelingbeyondthepostcard 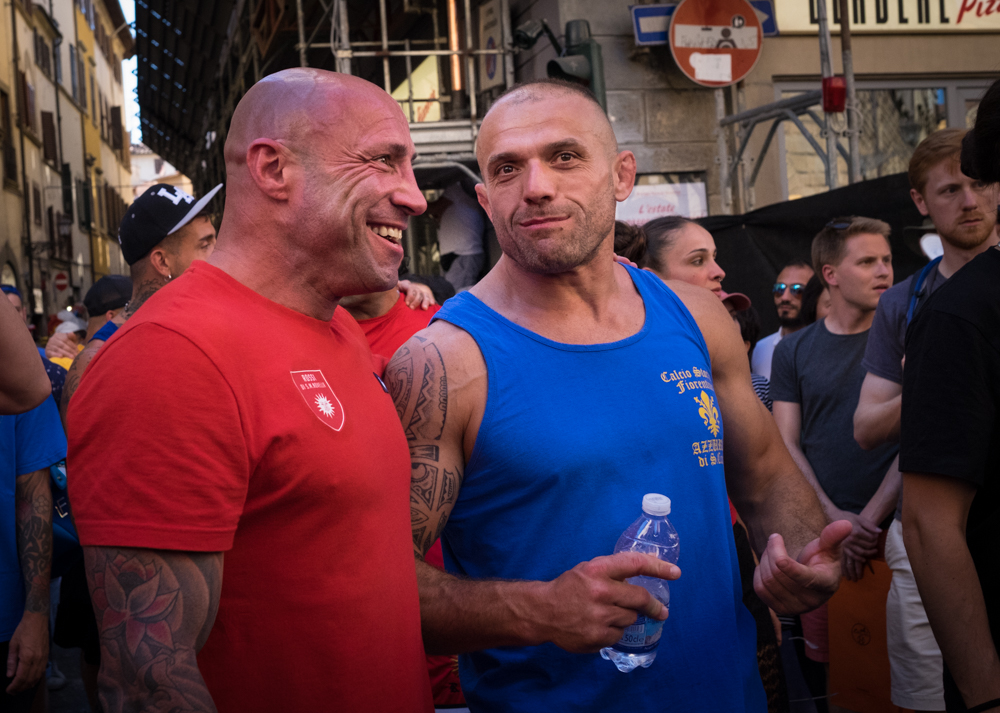 June 24th is the day that Florence celebrates its patron saint, John the Baptist. San Giovanni day is a big holiday in the city. The day starts out with a parade and special mass at the Cathedral of Santa Maria Fiore. It is also the day of the Calcio Storico final tournament. The day is finished off with a big fireworks show.

What is Calcio Storico? It’s an archaic form of football, part wrestling match, part street brawl. Tackling, punching and kicking are all permitted. The players literally put their lives on the line, at least their health because there is a very real chance of serious injury.

There are four teams that represent districts in the city. These districts are named after churches in their districts and each team has a color. Red is Santa Maria Novella, green is San Giovanni, blue is Santa Croce (my neighborhood) and white is Santo Spirito which is across the Arno River. The players do not get paid, the winning team gets bragging rights and a ceremonial white cow. Competition for a place on the team is quite competitive and making the team in considered an honor.

I set myself up on a path for the parade and waited for a couple of hours but I was not clever enough to secure a good spot. The police are out in force blocking the streets and the crowd gets intense. I got a few shots but not what I was hoping for.

I went to a Scottish pub to have a Guinness and watch the game on TV. There is much pomp and circumstance, the costumed men parading around the field and colored smoke in the end zones. When the game finally gets started it lasts about 45 minutes… which is all that they can probably handle. I saw several well bloodied players before the match ended.

The two teams that made the finals this year were the Red and the White. The Red team won 8-2. I was expecting more rivalry among the folks watching in the pub but everyone was very well behaved…. maybe because it was an Irish pub with about 50% tourists!? Anyway I’m glad I was able to experience it!